Dried ginger root, also known as Gan Jiang in Pinyin. Just as its name implies, it comes from fresh ginger root by drying. Dry Ginger is one of the most popular spice consumed in various forms as a delicacy, medicine, or spice. 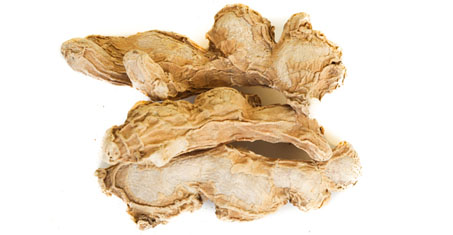 What Is Dried Ginger?

Dried Ginger is simply a hand of fresh ginger, that has been dried. Fresh ginger is thoroughly washed to free it of soil. Then the skin is removed and the whole rhizome is soaked in limewater for a day after which it is dried until moisture content reduces to 10%. There are other methods of preparing dried ginger such as immersing briefly in boiling water and then slicing ginger into small pieces for sun drying. Ginger may also be treated with sulphurous acid before it is dried. Dry ginger is available in whole and in powdered form and can be put to a variety of uses, giving you umpteen benefits. 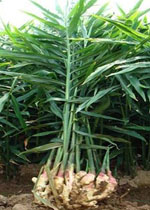 In China, it is basically cultivated and produced in Sichuan, Guangdong, Guangxi, Hunan, Hubei and other provinces. After harvested in winter, they are washed clean, sliced into pieces, dried in the sun or dried beside or over a fire.
Ginger is a seasonal crop and the best time to cultivate ginger is between the middle of March and early April. Generally it takes 8-10 months to get yield. However in dry zone areas ginger is cultivated November-December season.
Ginger is planted in raised beds or on ridges. Prevalence of high humidity throughout the crop period is desirable. Ginger thrives best in well-drained soils like sandy or clay loam, red loam or lateritic loam. A friable loam, rich in humus are ideal. However, being an exhaustive crop, soil should be rich in fertility. 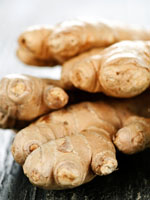 It is a flat block, 3 to 7cm long, 1 to 2cm wide, and with finger-like branches. Surface is greyish yellow or light gray brown, rough, and with longitudinal wrinkles and obvious segments. Branch points are often with remnants of scale leaves and branch top comes with stem scar and buds. It is solid in quality, powdery or graininess, and with yellow-white or gray cross section. Endodermis has obvious rings, vascular, and scattered yellow oil spots. It has peculiar scented odor and spicy flavor.
Main chemical constituents are 2% volatile oil, resin, starch, and amino acids. And the main ingredients of its volatile oil are zingiberene, phellandrene, camphene, shogaol, gingerol, zingiberone, borneol, zingiberol, citral, and so on.

Dried Ginger is used as an ingredient in the manufacture of perfumes and softdrinks and in the preparation of preserves, candies, and pickles. The Chinese consider dried ginger as the yang of hot/spicy food, which balances cold meals. It is also considered as ying for creating harmony.

1 - Anti-inflammatory - Dried ginger, is so powerful that in the near future it can replace the synthetic variety of ant-inflammatory drugs for healing infections.

2 - Anti-biotic - The antibiotic effects of ginger are exceptional. Studies shows that they find greater benefits from usage of ginger extracts than from antibiotics. The anti-bacterial effects of dried ginger on periodontal and respiratory infections are outstanding.

4 - Antifungal - Dried ginger and its miraculous antifungal capabilities were able to combat even the drug-resistant varieties of fungal spores.

6 - Curing Ulcers - You can overcome intestinal ulcer complications with dried ginger powder therapy. It is well known that the Helico pylori bacteria are linked to ulcers, but they can be repressed well with ginger derivatives.

7 - Helps in Controlling Toxicity - Ginger extracts help to prevent the harmful effects of a wide group of toxic substances, like the pesticide ‘lindane’, MSG or monosodium glutamate or even a chemical Bromo benzene,. Many of these toxic substances are known to bring about harm like liver damage, damage to kidneys and the nervous system.

8 - Helps to Control Bacterial Diarrhea - The Bacterium-induced diarrhea is the sole cause of death in high percentage of adolescent children in many developing countries. Although the bacteria are not responsible for death directly, the toxins released by them are very poisonous. Zingerone, a ginger based compound binds the toxins so that they cannot blend together with the gut, and thus helps to prevent death due to diarrhea.

10 - Increase Metabolism - Dried ginger powder contains thermogenic agents that are useful to burn fat and treat obesity. Take this powder to increase metabolism rate that will burn off stored fat in the body. This is also useful to reduce cholesterol and triglyceride levels in the body. 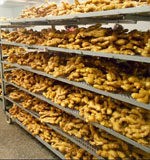 India remains the largest producer, consumer and exporter of this spice, with China close behind, followed by other Asian countries, including Nepal, Japan and Thailand.
The Caribbean islands are also known for their ginger production, especially Jamaica, where the quality of ginger is similar to that of the Indian plant.
South American countries such as Brazil, and African nations like Nigeria and Sierra Leone also cultivate the herb, along with Australia and Fiji, where it is grown on a smaller scale.

Dried Ginger was first exported from Asia in the first century AD along the lucrative Spice Route. Japan is the number one importer of dry ginger. Other major importing countries are United States, United Kingdom, Saudi Arabia, Singapore, Malaysia, Korea, Netherlands, Canada, Germany, and France. Both the Netherlands and Singapore serve as importing countries and re-export to neighboring countries, and other world countries.

Recipe for Beverages with Dried Ginger 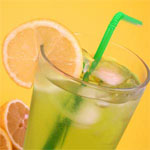 A: Add water, low-calorie sweetener, ground dried ginger, and lemon peel to medium saucepan and bring to boil over medium heat. Reduce heat to where it sustains a gentle boil and cook for about 7-8 minutes. Remove from heat and add the green tea bags. Steep this tea mixture for 10 minutes, stirring or dunking the bags often. B: Remove tea bags and stir lemon juice into the tea liquid. Cover and refrigerator for up to 1 to 2 weeks. C: To make a cup of iced tea, pour 1/4 cup of the concentrated tea mixture into a tall glass and stir in 3/4 cup of sparkling or seltzer water or club soda. Add ice cubes and enjoy!

Recipe for Cooking with Dried Ginger 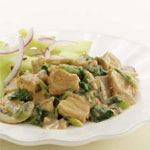 A: To prepare sauce: Whisk water, peanut butter, rice vinegar (or white vinegar), soy sauce, honey, dried ginger and garlic in a small bowl. B: To prepare tofu: Drain and rinse tofu; pat dry. Slice the block crosswise into eight 1/2-inch-thick slabs. Coarsely crumble each slice into smaller, uneven pieces. C: Heat oil in a large nonstick skillet over high heat. Add tofu and cook in a single layer, without stirring, until the pieces begin to turn golden brown on the bottom, about 5 minutes. Then gently stir and continue cooking, stirring occasionally, until all sides are golden brown, 5 to 7 minutes more. D: Add spinach, mushrooms, scallions and the peanut sauce and cook, stirring, until the vegetables are just cooked, 1 to 2 minutes more.

Recipe for Dessert with Dried Ginger 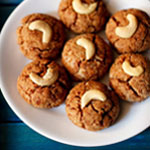 A: first take 1 cup whole wheat flour, 120 grams and ¼ tsp baking soda in a mixing bowl. B: with a spoon or spatula mix very well. also preheat your oven to 180 degrees celsius/356 degrees fahrenheit. C: add 4 tbsp coconut oil. you can also add 3 tbsp coconut oil. D: lightly mix the oil with the flour. instead of coconut oil, you can also use 4 tbsp butter or ghee. E: then add 1 tbsp fine sooji, ½ tsp cardamom powder and ¼ tsp dried ginger powder. F: add ½ cup powdered or grated jaggery, 85 grams. G: mix everything well with your fingertips. Add 2 to 3 tbsp water. add the water in parts and start mixing with the dough. depending on the type of flour, you may add less or even more water. H: just mix together with your hands and gather to a dough. don't knead. lightly mix and form into a dough ball. I: pinch small to medium sized balls from the dough and place on a greased tray. Press one cashew half or almond on each cookie and slightly flatten them while pressing the cashews. J: bake in the preheated oven at 180 degrees C/356 degrees fahrenheit for 20-25 mins till the tops become light golden. Since oven temperatures vary, it may takes less or more time.